Developing Mental Toughness in Leadership and Why It Matters 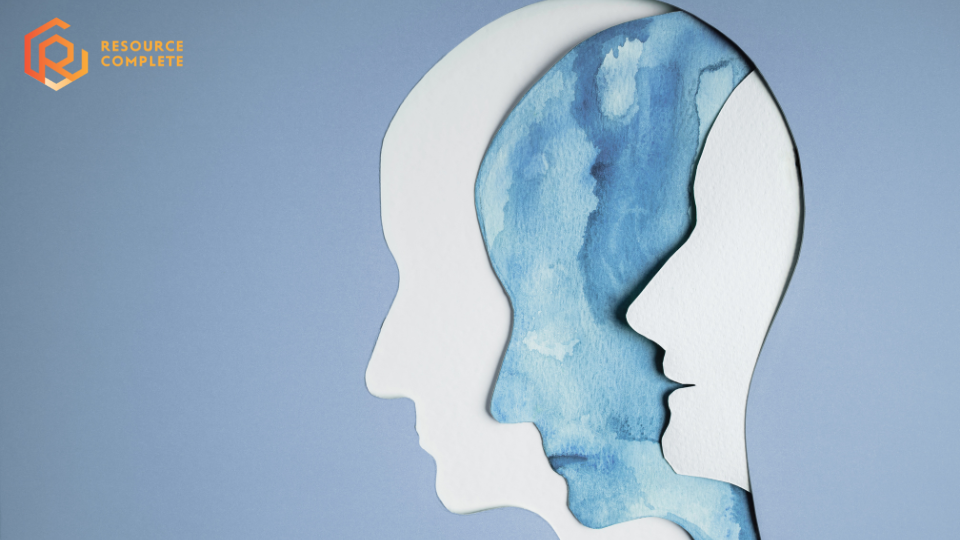 What are the traditional definitions of leadership? Or, rather, what are the skills and characteristics associated with successful leaders? Of course, these may vary depending on the role, but many people would discuss a leader’s ability to be decisive, dictate strategy and motivate those around them. Regardless of which is deemed to be most important, one thing we can be certain of is that Mental Toughness will have a direct impact.

Despite this, until now the concept of Mental Toughness has largely been overlooked or even misunderstood, with those interested often using the wrong definition as an inspiration or point of reference. However, as we come to learn more about it and its key components, its importance as an aspect of leadership is increasingly clear.

Developing Mental Toughness as a leader can have many positive benefits for yourself and your team. In addition to an improvement in your response to challenges, you can gain the trust of those around you while empowering your team to work at their best, seeing their belief in their own abilities grow alongside your own.

WHAT IS MENTAL TOUGHNESS?

We can start with something of a definition. Mental Toughness is a personality trait which determines and explains, in part, how we respond mentally to stress, pressure, challenge and opportunity – irrespective of circumstance.

Albeit increasingly less so than in the past, some will still look at the term “toughness” and assume that it is somehow related to being aggressive, macho and even masculine. It is none of these. Toughness has many meanings. We are discussing it in the sense of the word that relates to resilience and positivity, and research shows that Mental Toughness patterns are largely similar irrespective of gender.

For the most part, people’s understanding of personality is confined to behavioural aspects; for example, describing and assessing how we act when things happen to us and around us. Mental Toughness is focused on how we think when events occur.

How we think then has a significant impact on how we act, which in turn affects performance, wellbeing and agility.

There is a key phrase in our definition of which we must take note, though: “in part”. This means that, while Mental Toughness is a big part of the solution for performance and wellbeing, it’s not the silver bullet. It is, however, a personality trait which it is possible to develop in order to improve one’s leadership mindset.

THE 4 CS OF MENTAL TOUGHNESS

The term “Mental Toughness” was coined by Jim Loehr, the legendary sports psychologist, who understood the importance of developing an athlete’s mental skills, as well as their technical and physical skills.

In 2002, following eight years of working with colleagues, Professor Peter Clough was able to describe for the first time the components of Mental Toughness in what is called the 4 Cs model, now the most widely accepted and best evidenced explanation. The 4 Cs are Control, Commitment, Challenge and Confidence. By 2020, we knew that our mental approach to events was influenced by eight factors. These are described briefly below:

What this means … the eight factors

WHY IS MENTAL TOUGHNESS IMPORTANT FOR BUSINESS LEADERS?

Now we have a definition of Mental Toughness and an explanation of the 4 Cs, it becomes easier to see how it is applied in a leadership environment.

Demonstrating leadership often requires maintaining poise in the face of difficulty, keeping focus on what is truly important, being bold to see opportunity when others see threat and having belief in one’s own capability to deal with whatever arises.

Stress, pressure, challenge and opportunity are consistent features of everyone’s lives. Those who aspire to provide leadership have a heightened sense of the stressors and pressures of work and life; to succeed in providing leadership, we still need to bring mental toughness to bear on what we need to do.

Indeed, we have always known this to be important. Plato spoke about fortitude, the Romans spoke about stoicism, others talked about resilience. However, until recently it was too difficult to describe in such a way so that every person could grasp it, develop self-awareness and ultimately use this to be the best version of themselves that they could be.

Developing this self-awareness is crucial for any aspiring leaders, and there are two factors to be considered.

Firstly, what is my mental toughness profile and what does it mean for me in striving to deal with the world around me? Which factors can hold me back and which factors are an asset? That is contributing to my leadership capability.

Secondly, and of equal importance in leadership, what does my Mental Toughness profile mean for the way I engage with other people? Does my understanding of Mental Toughness enable me to understand why others respond the way they do when asked to do something?

Here we present the eight factors listed earlier, but this time indicating their significant implication on leadership. 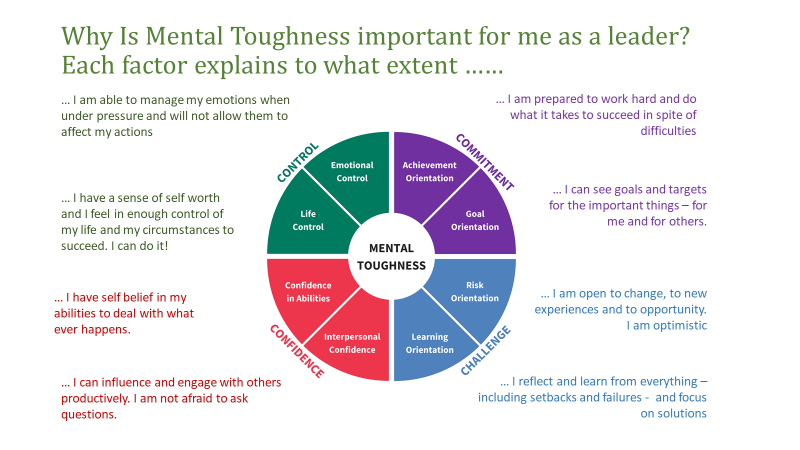 ASSESSING YOUR OWN MENTAL TOUGHNESS

An important by-product of developing the concept of Mental Toughness concept has been forming a reliable and valid psychometric measure – the MTQPlus. This helps users to assess one’s levels across overall mental toughness, the 4 Cs and the eight factors.

Like many psychometric instruments, the MTQPlus uses what is called a Sten Scale to indicate the level of mental toughness. The MTQPlus is also a normative measure.

The “norm” for an average or typical person would be 5.5 on each scale. The scores often associated with mental sensitivity are those in the 1–3 range. Scores achieved by the mentally tough tend to fall in the 8–10 range. Sixteen per cent of most populations fall into these categories. Around two thirds of us score in the 4–7 range and can therefore consider ourselves to be reasonably mentally tough.

However, the important thing here is that we are all different. Our profiles may vary even if our overall level of mental toughness is the same.

HOW TO BUILD MENTAL TOUGHNESS

As explained above, it is possible to build Mental Toughness.

When training Mental Toughness, the essence is to create self-awareness of our current level. From that we can decide whether we need to develop aspects of our Mental Toughness or stay as we are and, instead, learn coping strategies for those times when it might create an issue for us.

The concept and the measure have become increasingly frequent components of leadership development programmes.

As with any development activity it will progress through key stages:

Self-awareness, reflection and diagnosis
The above example of a test output is real. The individual had many advantages in dealing with a very challenging leadership role. However, we can see that there is indication of mental sensitivity around two factors – Emotional Control and Learning Orientation.

Feedback and discussion led to an awareness that this perhaps wasn’t always an advantage. The leader acknowledged that this was an issue and concluded that this was a priority for development because it was affecting their own and others’ performance and wellbeing.

The individual was introduced to techniques for managing emotional responses and committed to practice these. Guided imagery was a particularly effective intervention.

The result: restoration of wellbeing and performance.

Mental toughness is in one sense invisible. It is describing what goes on in one’s head. Unlike behaviour, we can’t see it. But it has a big impact on leadership effectiveness. The concept and the measure enable us to access this.

In the words of one user: “It’s making the invisible, visible”. 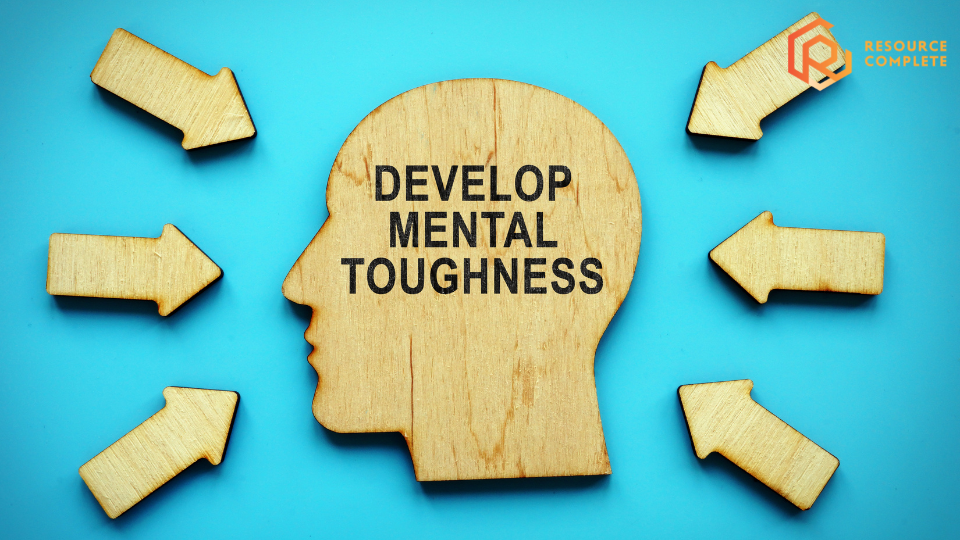